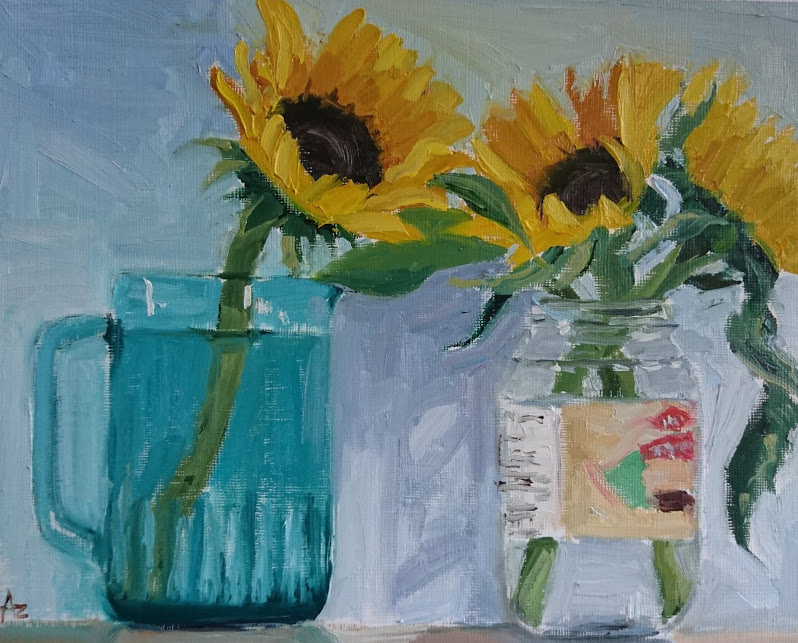 I bought a set of  three ceramic ducks from a charity shop . Combining them with the jar of daisies speaks to me of simple and pure pleasure. Working with mainly white and greys was not as hard as I imagined.

I highly recommend these small square canvases, they are perfect for artists who don't have alot of time, but have a big love for painting.

A simple orange ..how difficult could it be !!!!

This the view from our bedroom window of the houses opposite us with a road in between. I painted this a couple of weeks ago ,the leaves are out on the silver birch now.

The wedding I arranged the flowers for is over and I got all my vases back and surprisingly some of the flowers too.Most of the time the guests pick the flowers out of the vases and I get empty vases.
My house smells like a flower shop at the moment...I am blessed.   :  )

He who is of calm and happy nature will hardly feel the pressure of age, but to him who is of an opposite disposition youth and age are equally a burden.
Plato
Posted by Azra at 18:07 9 comments:

I had to arrange some flowers for a wedding last Friday and I was lucky to have some of these beautiful large red roses left over. They have the sweetest fragrance .

Its been a glorious day today with blue skies and fluffy clouds!!

“It is good to love many things, for therein lies true strength, and whosoever loves much performs much, and can accomplish much, and what is done in love is well done.” ~Vincent van Gogh

“When you are grateful fear disappears and abundance appears.” Anthony Robbins

“Expect your every need to be met. Expect the answer to every problem, expect abundance on every level.”
~ Eileen Caddy

Its funny how you can paint any subject over and over again and yet still end up getting stuck.I had to scrape this one twice before I was satisfied with the result. Its something I very rarely did,I feel that is progress to admit to a mistake and persist with it and keep trying.

I listen Marvin Gaye alot and in particular this song.... http://www.youtube.com/watch?v=X1uelY2SGmw

My heart goes out to the people in Boston, any loss of life is a loss to the world.

Last night I decided to try more often to take each image and explore it in different mediums.It actually felt liberating and I thoroughly enjoyed it.

It feels to me that before I started painting i was waiting to live a life  and now I am actually living a life.Although I have so much to learn I am so glad I am on this journey.
Posted by Azra at 15:05 9 comments:

Ok ,guys I would love to know who is your favourite actor and why,is it looks? The way they act or both?
My favourite actor  of all time would be Burt Lancaster,he had passion ,there was that sparkle in his eyes that was mesmirizing. My favourite film
that starred Burt is The Train,its set in 1944 Paris and a train full of art treasures. I love that film and could watch it over and over again.

I went shopping for groceries and also came back with this bouquet of hyacinths,tulips,some yellow spray that I can't name,daffodils, anemones and pink carnations.Hopefully i will be able to paint all the flowers eventually.I allow myself the luxury of flowers because I gave up buying the latest fashions long ago.Its all about what I can paint and my next painting. : )

How light bounces of different surfaces is actually what painting is all about. Trying to capture the light is elusive but oh so fascinating.
I haven't been painting much these last few weeks,I think the long winter was dampening my spirits.I know that is really not an excuse.A dear friend and artist has said to me to keep my brushes wet and I think ultimately that practice of painting everyday is the best teacher so any time away from painting I regret very much unless its absolutely necessary. So I resolve to paint and post more regularly. I hope and wish that all my fellow artists out there also find joy in their art and find more time to paint.

The sun has been shining,the blossoms are finally coming out of hiding.Spring is here at last and it feels like the world is waking up from a long,cold sleep. A friend says its bad luck to pick blossoms from a tree and the trouble with hearing something like that is even if you try not to believe in it
there is always that doubt in your mind.So I will wait until I see some blossoms that have fallen off and paint them or take some photos.
Posted by Azra at 22:22 5 comments:

This is a scene from our local  farm.
With spring being so late I bought this radiator bed for our cat,she absolutely loves it and spends most of the day in it.

I've been decluttering like mad and it feels so good to clear out yesterday to make room for tomorrow.
﻿

I love watching the process of how a lily opens up to the world . 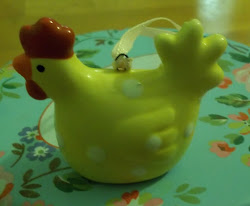 This started off as my wish to connect with my fellow artists and became the The Traveling Chicken.

Azra
United Kingdom
My name is Azra Iqbal and I have always wanted to paint.I have been inspired by so many artists who paint daily or at least as often as is possible.From the 20th November 2010 I have started a painting a day.I welcome comments on my work,thats what will make this journey interesting.My email address is azraiqbal2000@hotmail.com If you are interested in any of my paintings I have a paypal account which can be used.Thankyou for viewing my work. I would like to give a special mention to Ken Taylor who is an amazing art teacher and has greatly influenced my confidence as an artist.